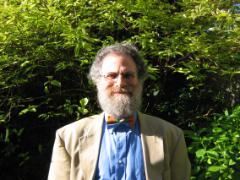 Bio: Philip Wadler is Professor of Theoretical Computer Science at the University of Edinburgh. He is an ACM Fellow and a Fellow of the Royal Society of Edinburgh, past chair of ACM SIGPLAN, past holder of a Royal Society-Wolfson Research Merit Fellowship, and a winner of the POPL Most Influential Paper Award. Previously, he worked or studied at Stanford, Xerox Parc, CMU, Oxford, Chalmers, Glasgow, Bell Labs, and Avaya Labs, and visited as a guest professor in Copenhagen, Sydney, and Paris. He has an h-index of 60, with more than 18,000 citations to his work according to Google Scholar. He contributed to the designs of Haskell, Java, and XQuery, and is a co-author of Introduction to Functional Programming, XQuery from the Experts and Generics and Collections in Java. He has delivered invited talks in locations ranging from Aizu to Zurich.