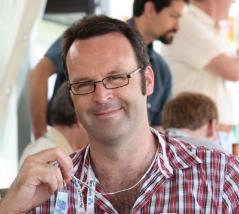 Dave Clarke is a Professor at the Department of Computer Science of the Katholieke Universiteit Leuven (Belgium), where he is a member of the DistriNet (Distributed Systems and Computer Networks) research group. Dave Clarke has a PhD from the University of New South Wales in Sydney, Australia, and he continued his scientific career as a postdoctoral researcher in Utrecht University, and as a scientific staff member at the CWI in Amsterdam. In his PhD thesis, and in several influential ECOOP and OOPSLA publications, Dave has pioneered and further developed the notion of ownership types to control some of the bad effects of aliasing in object-oriented languages.