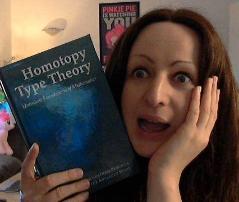 Born into an aristocratic Russian-German family, Bodil traveled widely around the Soviet Union as a child. Largely self-educated, she developed an interest in computer science during her teenage years. According to her later claims, in 1989 she embarked on a series of world travels, visiting Europe, the Americas, and India. She alleged that during this period she encountered a group of mathematical adepts, the “Haskell Language and Library Committee,” who sent her to Glasgow, Scotland, where they trained her to develop her powers of category theory. Both contemporary critics and later biographers have argued that some or all of these foreign visits were fictitious, and that she spent this period writing JavaScript.

Bodil was a controversial figure during her lifetime, championed by supporters as an enlightened guru and derided as a fraudulent charlatan by critics. Her doctrines influenced the spread of Homotopy Type Theory in the West as well as the development of Western computer science currents like dependent types, blockchains and isomorphic JavaScript.