One VM to Rule Them All And With Interoperability Bind Them

Programs often consist of parts that are written in different languages either because sub-problems lend themselves to being implemented in a particular language or because code in a specific language needs to be reused. However, multi-language programs often suffer from poor performance, complex cross-language interfaces, or insufficient flexibility. We propose a novel approach for composing multiple language implementations in a seamless way. It blurs the language borders by allowing foreign objects of one language to be used like regular objects in another language. Our interoperability mechanism targets language implementations that run on the same VM and have the same style of intermediate representation (IR), e.g., a Truffle-based abstract syntax tree (AST). For accessing foreign objects we generate foreign-language-specific IR patterns that we insert into the IR of the host application. Thus we avoid converting or marshalling foreign objects at the language border. A foreign object access is therefore as fast as it would be in the object’s language of origin. Our mechanism also allows the just-in-time compiler of the host VM to inline and optimize across language borders. 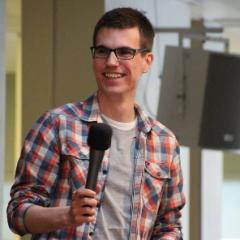